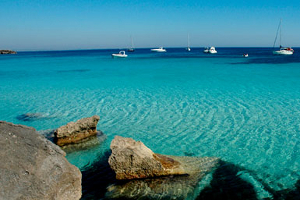 The archipelago consists of three main islands, Favignana, Levanzo and Marettimo, and two uninhabited islands, Maraone and Formica. The surrounding sea is a Marine Nature Reserve.

Favignana is the largest, the most populous and, perhaps, the most famous of the three islands. It has an elongated shape, slightly closer to the center, which justifies its nickname of “butterfly”. In the half of the 800, it took on an increasing importance in the economic landscape of the area, due to the Florio family, who planted a big tunny-fishing nets, capable of spectacular seasons of slaughter( the famous “mattanza”). Today the ancient tradition of the massacre is renewed every year, continuing to be the most important event for the island. Splendide waters, small bays and the deep indescribable colors. The name of one of the most beautiful place of the island, Cala Rossa, remind us that the battle of the Egadi was fought in its waters, in 241 BC. On the top of the mountain, at 304 meters of altitude, you’ll see the Castle of S. Caterina, built by King Ruggiero in Norman times.

Levanzo, with its 5 km, is the smallest and the least populated island of the archipelago. A town with a few inhabitants and surrounded by high and rugged coastline that open on a clear sea. The appearance of the island is pretty wild, made of loops, caves and mountains. His greatest pride is the Grotta del Genovese: in its walls important graffiti of the the Upper Palaeolithic , representing men, animals, scenes of hunting and fishing, have been found. They represent also one of the oldest demonstration of tuna fishing in Sicily.

Marettimo is the farest of the three islands and even the most mountainous, at 37 km from the coast of Trapani. You cannot lose the island tour and the visit into the caves which open on its walls, descending on the sea. In the top of Punta Troia, you can clearly see the Castle, used by Arabs as a watch tower and then transformed in a prison. Inside of it William Pepper was imprisoned too.